Whenever I think of “CAN AM” racing, I think of big-block Chevy engines sporting large injection trumpets, putting out loads of power through massively wide tyres and all topped off with very high aerodynamic wings. Â When it comes to the latter item, perhaps the biggest wings of them all belonged to the Chaparral 2H – it was absolutely enormous. Â  The Chaparral 2H was an “extreme” design that looked very purposeful on the track, however, it sadly was a complete disaster, and after racing on only five occasions, it was moth-balled. Â  John Surtees hated the handling of the car as it’s track-width was extremely narrow making the car behave twitchy and unpredictable, and before he agreed to drive it at Laguna Seca, he insisted on a series of modifications to improve the driving position (as the original design was based on a fully enclosed cockpit!) Â The monster wing wasn’t part of the original design either but was added during the development stages to improve grip but at the same time it added extra drag, thereby making the car slower overall. Â The whole project seemed to loose it’s direction and the car was eventually consigned to the back of the garage! Â I’ve photographed my Minichamps 1/43 scale version of the car posed with a suitable Â Denizen figure which I’ve painted up to represent “Big John” as he reluctantly takes on driving duties at Laguna Seca in October 1969 – unfortunately a lack of oil pressure prevented him from taking part in the race itself. Â Another notable event in 1969 was “Woodstock” – ah, those were the days! Â Both the figure and diecast are currently up for sale (separately) on the “Bay”. Â Cheers, 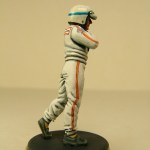 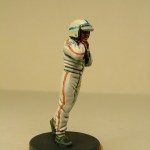 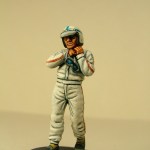 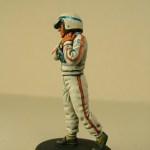 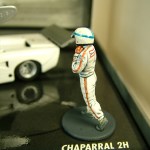 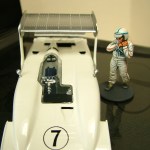 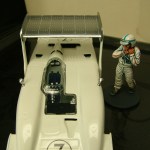 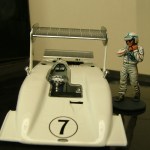 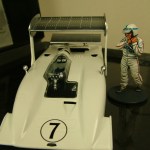