A sight which brought a smile to a lot of faces in the parking area in Silverstone at the Moto GP (a couple of years back), was the sight of a pink Ducati entitled â€œThe Nurseâ€ â€“ Â what else!Â  I took a couple of snaps as it gave me an idea for a 1/12 scale resin figure of a female bike rider which has been languishing in my unmade stock for some time, together with a 1/12 Tamiya Yahama. Â I eventually completed the figure, however, my brother in the meantime took â€œa loanâ€ of the Tamiya kit – the words; “sure, youâ€™re never going to make this” were mentioned! and as I think about it, heâ€™s probably right!Â Â  Anyway to celebrate Rossis return to Yamaha (and the podium – hurray to that!), I decided to take some photoâ€™s of the completed figure using appropriate Minichamps bikes on which to â€œperchâ€ her.Â  So although the figure is supposed to fit most 1/12 bikes, I canâ€™t confirm itâ€™s suitability in the case of the Tamiya kit.Â  Â Iâ€™ve made some modifications by adding theÂ nurses hat (from Milliput) and Iâ€™ve also given her raised platforms on the boots so the feet are nearer the ground.Â  Â I painted a Yamaha(ish) livery and applied a selection of MSM decals â€“ with â€œThe Nurseâ€ being a “DIY job” courtesy of my inkjet printer. Â All painted using Vallejo acrylics, and to seal the decals I gave the entire suit a couple of coats of Klear â€“ which also helps that leather look. The figure is by Legend Productions and the decals can be purchased directly from MSM in Hong Kong or Modelworks in the UK,Â  Cheers for now, and hopefully next time out Rossi will be on the top step!Â Â  P.S. Hopefully he wonâ€™t need any nursing! 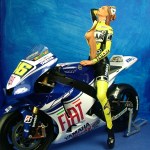 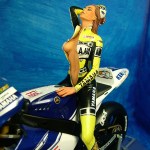 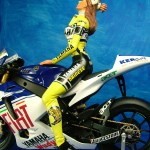 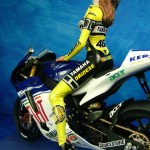 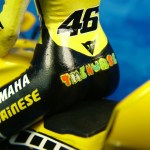 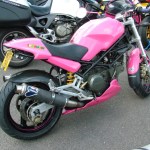 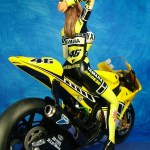 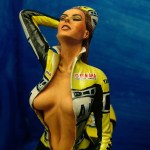 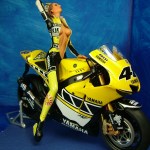 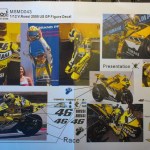 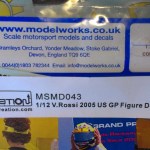