Rossi lining out for Inter Milan, I wonder?  This time last week Jeremy Burgess was his Chief engineer and now he’s out of a job – who would have thought? – so anything is possible! Seriously though, personally I was of the view that Rossi might hang up his helmet after what was (for him) a very lacklustre season – he just looked like he had lost the edge so I was really surprised when he dumped Burgess.  Rossi is reputed to have exactly the same machine as Lorenzo, so why was he always off the pace?  In most of the races this season,  after Marquez, Lorenzo and Pedroza, he was really only the best of the rest and apart from one win, he only managed a handful of podiums.    He has certaintly laid down a marker for next year with the hard line he has taken with Burgess, so we will have to wait and see what 2014 brings – can the new engineer deliver a better bike and if so, can Rossi get back to his winning ways??!  Back to the figure, I eventually got those black stripes painted on by hand and tidied up and I think it looks ok so far.  I used Tamiya masking tape and I was a bit worried that it had attached itself a bit too firmly to the figure in that it might be difficult to remove.  But it all came off quite cleanly without leaving a trace – amazing stuff, I must say very impressive.   I’ll give it a coat of Clear and then apply the decals followed by some matt varnish – more later, Cheers 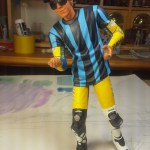 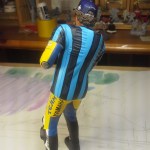 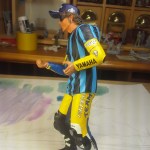