Highly unlikely – but “what if”?  Using one of the many Minichamps figures from my Rossi collection, I set about seeing what an “Inter clad” Rossi might look like by doing a fairly basic conversion using paint and custom decals.  I read recently that Rossi is an avid follower of the Italian Serie A soccer team; Inter Milan so I thought it would be a kind of unique and interesting idea to do a conversion with him wearing his favourite soccer team shirt. The 2006 standing figure of Rossi (who is curiously wearing the Italian soccer team shirt) spraying the champagne would mahe an ideal base – given that the shirt is already sculpted over his leathers!  Using some nail varnish remover I managed to get all of the original decals off and then I masked him up for a coat of primer followed by Vallejo light blue.  This gave me an opportunity to try out my new (scratch built) paint booth/extractor – of which I will tell more on later;  suffice to say it did the job very well. While that was drying, I “pinched” a couple of suitable team shirt decals from the net and printed them off in my ink jet printer.  They’ve been given a couple of coats of clear varnish and I’ve set them aside to dry and “harden”.   Next stage is to finish painting the figure and I’ll probably hand paint the dark blue stripes on his shirt and then go about applying the decals – I wonder what number I should put on the back of his shirt?? – More soon, cheers, 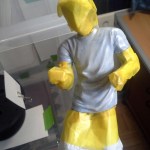 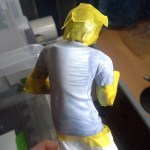 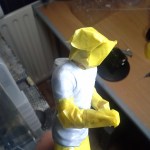 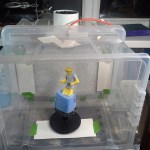 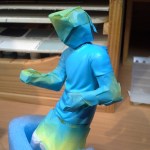 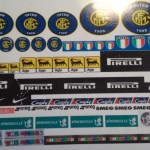 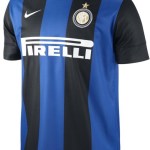 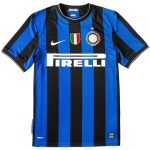 I since found out that the dark blue stripes are infact; Black!  There seems to be two versions – one with thick stripes (giving two on the front and back ) and the other with thinner stripes (three on the front and back) and despite the fact that it’s slightly more work, I have gone for the latter, primarily because it just looks more balanced.  Anyway, I’ve made a first pass with three values for dark, mid and highlight tones and I think it looks ok.  Rather than use pure Black, I mixed a mid colour of Oxford Blue and Black and varied the amount of Black or Oxford to lighten or darken it.   I’ll tidy it up and then apply the decals – probably be next week at this rate, as tomorrow, I head off to the IPMS in Telford for the Annual show – so a weekend of non stop “Model-talk” and perhaps a pint or two, will be had! Cheers for now, 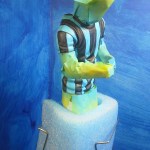 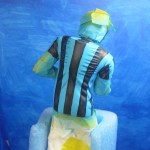 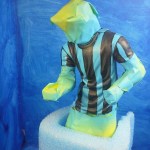