Few would disagree with that strapline, particularly when Enzo Ferrari himself likened Villeneuve to the great Tazio Nuvolari. “When they presented me with this ‘piccolo Canadese’ (little Canadian), this minuscule bundle of nerves, I immediately recognised in him the physique of Nuvolari and said to myself, let’s give him a try.” Praise indeed, particularly when one remembers that the Commendatore had given this opinion when when Gilles was without a drive and was getting the “cold shoulder” from many other team principals due to his reputation for having an over-exuberant driving style!  This is a series of three pieces featuring Gilles Villeneuve in 1/20 resin.  I’ve used the same crisp casting by GF-models in each piece.  These figures are great value; the figure comes supplied with a bare head, two helmeted heads (wearing both Bell & GPA versions) and two empty helmets – so lots of options are covered.  To add a bit of variety to the pose, (and make it a bit more relaxed), I modified one by adding arms using Milliput and tucking both hands in his pockets.   The figures are all painted with Vallejo acrylics and the decals are a mixture of custom and aftermarket sets.  The bases are resin, and each comes with an etched numbered plate.  Come to think of it, I must do a similar series featuring that other great driver ; Tazio Nuvolari! 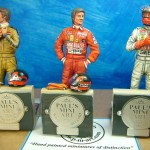 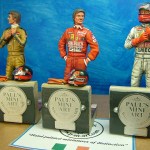 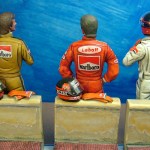 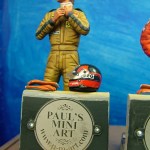 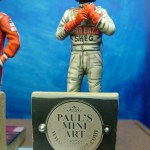