….or some such other noble phrase -(it was all I could think of at the time) – so apologies if it sounds a bit OTT!   Having finished painting the Enzo figure, I thought it fitting to combine him with two of his favourite charges; Niki Lauda and Gilles Villeneuve.  I’ve seen this figure painted on a number of occasions and it usually depicts Enzo wearing a suit (black or grey) so I decided to finish him wearing smart casual of Buff jacket and blue grey trousers. And like all Italian men, the outfit is always worn with highly polished leather shoes!  The Prancing Horse lapel badge is finished using a small prancing horse decal (from a 1/43 kit) and then sealed with varnish.  The heading photo of Enzo with Gilles sitting in the 312T4 is unlikely to have happened in the real world as the car depicts Gilles mounted in the car as it would have run in the US Grand Prix East (Oct,’79) and as we all know, Enzo never attended Grand Prix race days! 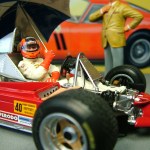 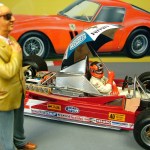 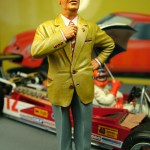 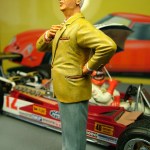 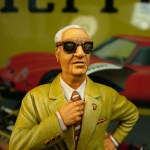 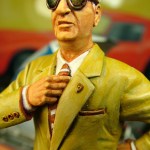 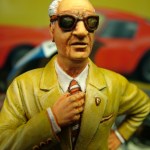 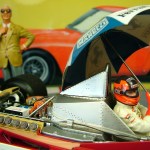 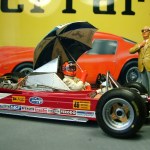 The diecast model is a superb example produced by Exoto.   The car is shod with rain tires and it comes with the little umbrella to fit the drivers hands – a charming piece and now long out of production.  I bought it (from another collector) with the intention of constructing a full pitlane diorama using it as the centre-piece.  That was five years ago, and I’m afraid I just don’t have the time available now to complete such an undertaking, so it will be up for sale on Ebay shortly –  at least I got the main character of Enzo completed!   The model comes in it’s original packaging and is double boxed (inner and outer) – the outer box shows some moisture staining (but only on the outside surface). The original (flimsy) tissue is still present and although torn in some places, I have managed to keep it intact in order to maintain the integrity of the model.  Two of the white panels of the umbrella show signs of fading (but only on the underneath side).  Initially I thought this was due to it being exposed to the sun, however, as the fading is confined only to the underneath side of the umbrella I suspected another reason.  On further investigation, it would appear that a decaying piece of the original foam packaging became trapped underneath the unmbrella and reacted with the plastic.  Since then, I have replaced any of the foam which may come into contact with the umbrella.   One of the supporting strutts on the umbrella (once again underneath) has been repaired.  The model car (and driver figure) are totally unaffected and as I say, the car is in Mint condition.  View a full photo gallery of this model (312T4). 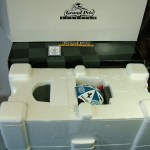 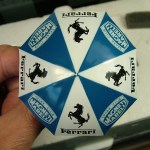 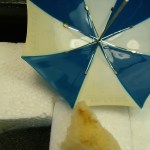 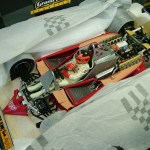 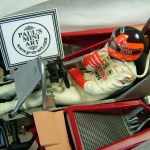 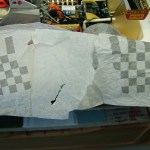 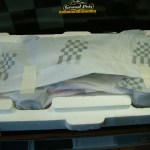 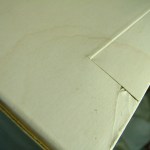 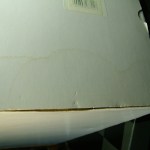 The figures are all hand painted resin in 1/18 and 1/20 scale and all will be available separately on Ebay shortly. 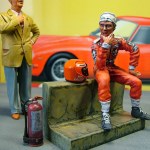 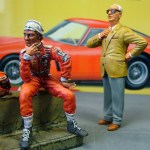 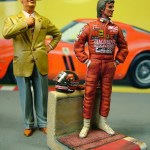 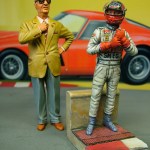 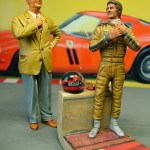 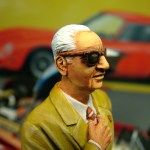