In this workbench cluster I have five 43rd figures together with a rather surprising “find” in 1/32 scale!  The “find” to which I refer, is a 1/32 scale resin casting of Tazio Nuvolari produced by an Italian company; Meridiana.  Although I tend to paint exclusively motorsport related figures these days , I do stay in contact with whats happening in the world of military miniatures, and it was while browsing some of the new releases over the last couple of months that I was very surprised to see a 1/32 resin figure of Tazio Nuvolari nestling among the myriad of wonderfully sculpted array of Roman warriors, American Civil war and WWII figures!     Motor sport related miniature figures tend to be produced in scales which closely match the appropriate diecast scales, hence 1/43, 1/18 etc.   So not only was I surprised to find a figure of Nuvolari but for it to be scaled to 1/32nd (54mm) is quite odd.   While 1/32 is not a “natural” diecast scale, it does however align with miniatures used in Slotcar racing (Scalextrix), so perhaps this was the intended use.   It’s a beautiful casting and comes with it’s own little base and an optional laurel wreath (to depict Nuvolari as the victor) – what else!   It’s beautifully sculpted to a wonderful likeness of the man himself and crisply cast in grey resin.  I bought two, (needless to say) and once they arrived by post I wasted no time in getting one assembled and primed, so I’m looking forward immensely to putting some paint on it.  I have plans to convert the second casting and hopefully produce some other versions of the Flying Mantuan in metal – so more on that later.   Also cleaned up and primed are the figures I received a couple of weeks ago from my good friend (and wonderful caster) John Murphy.  They include; Elio de Angelis, Gilles Villeneuve, Stirling Moss, Tazio Nuvolari and a 60’s sports car figure (Musso/Maglioli) – more on these later.  Cheers for now, 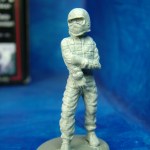 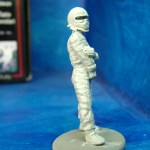 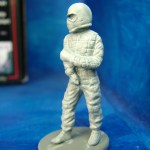 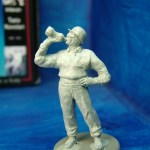 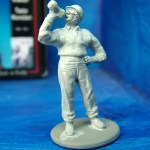 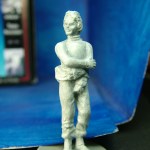 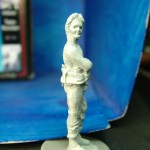 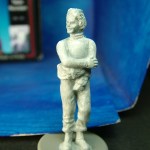 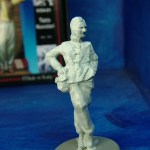 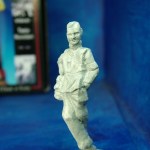 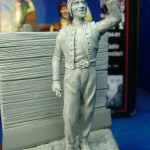 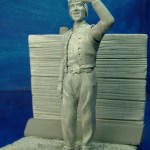 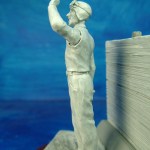 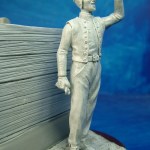 I made a start blocking in the main colors on the 1/32nd Nuvolari figure and while I was at it I allowed myself drift onto a larger scale figure of the great man, which caught my eye on the shelf above my bench.  The larger figure is a 1/20 (or perhaps a 1/18) resin casting I undercoated some time back (and has since been crying out for color!) so I took it into my head to paint his overalls that “cherry-red” colour he used to sport in his early days with Alfa Romeo.  I say “cherry-red” when in fact, I’m not really sure what color exactly it was as I have only ever seen black and white photo’s of him wearing these dark overalls – hence my assumption they are a dark shade of red.  I started out with an initial lighter shade, so I’ll darken them down (with a couple of glazing coats) at the next session – BTW, the weather is still holding as I write this in the garden sunshine,…… now where did I put  that (cherry) red glass of wine! 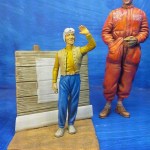 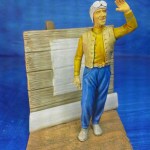 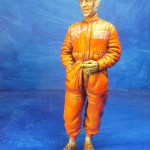 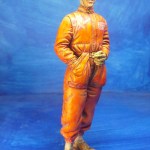 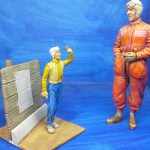