I finally made a start on the old and partly (badly) built 1/20 Alfa P3 kit I picked up earlier in the year.  The paint finish on the body panels (factory applied) definitely doesn’t do the kit any justice.  It looks too heavily applied, and apart fom the fact that it clogs the louvre detail, it also looks like the paint was applied without any real surface preparation so many of the casting imperfections are still visible beneath the paint.  Nothing else for it; I reached for the Nitromors and stripped all the panels.  With the paint removed and following some initial cleaning with a file and steel wool the details (and unfortunately the imperfections) are begining to stand out – so more cleaning work ahead!   I also want to add some proper hood fastners rather than the ones on the kit which are just moulded into the surface detail, so I’ll also file these away when I’m cleaning the panels and fit new ones fashioned from wire. The tires on this old kit don’t have a proper thread pattern so I contacted Revival and they kindly sent me on a set of four beautifully moulded Pirellis.  I suspected changing the tires on these kits was going to be either easy or a pain – and unfortunately it was the latter!   It’s possibly down to the age of this kit and the fact that the tires have been on these rims for so long and also the fact that the rubber tires themselves are quite thick and inflexible, but it took a lot of persistance on my part just to remove one of them!  As if that wasn’t enough, after struggling for quite a while to get the tire off, it was even more difficult to refit the new tires without copious amounts of vaseline gel.  In contrast to the older tires, the new tires are made of very flimsy rubber and really didn’t want to go over the rim without tearing slightly.  Although I eventually got the new tire on, I don’t think it’s made to fit the older rims – on close examination you can see they don’t fit snuggly and a little of the inside rim  is visible.  So I’ll have to think long and hard before I invest too much time on this aspect of the kit.  Lastly, instead of the partly built engine, I’ll probably start again and use one I was already building as a stand alone kit – (Revival sell engine kits).  In a smaller scale, I”ve also given the 1/32 figure of Nuvolari an initial blocking in of color and I also added his trademark tortoise badge (using Milliput) to the collar of his sweater.   I got hold of a 1/32 resin Alfa 8c slot body to keep him company, so I’ve also given it a blast of primer.   More later. 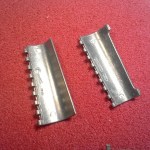 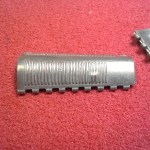 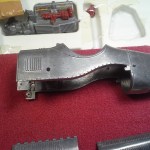 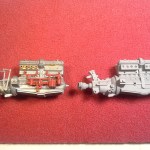 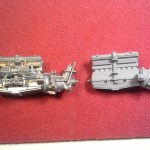 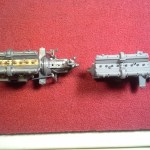 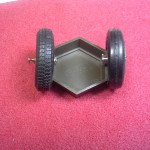 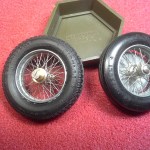 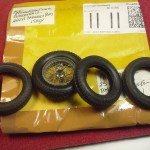 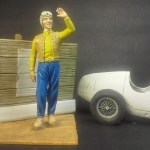 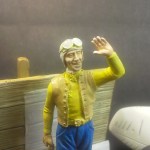 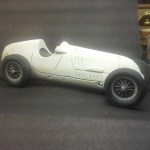