Some of my earliest childhood “play” memories, are an obsession to draw and paint.Â  As a child, I loved to get hold of newly pared pencils or, a box of paints and then spend hours just drawing and colouring.Â  Many of the subjects I drew were inspired by characters from boys comics of the day like, the “Victor” or “Hotspur”, featuring the likes of; “Captain Hurricane”, RAF pilot “Matt Braddock” or Sgt. “Union Jack Jackson”, who were all leading their own fight against the baddies and were larger than life in my childlike imagination.Â Â  Westerns stories (aka “Cowiers”) were also a great source of inspiration, and most of these heroes were dished up every Saturday afternoon at the local cinema, where the latest exploit of , Gene Autrey, Roy Rogers or the infamous Lone Ranger unfolded in magical full color on the big screen – what a buzz that gave a youngster for the rest of the week!Â Â  I also developed a love for Motor Sport at a very young age – ever since my father brought me to my first race in Dublins Phoenix Park, I developed a great passion for the smells and sounds associated with Motor Sport.Â  I also paint a wide range of subjects from still lifes to landscapes and anything which catches my “inner” eye!Â Â Â Â Â  On the other hand, I also like to work in a three dimensional way, making and painting miniature figures.Â  After nearly 40 years making and painting military figures from a variety of eras and conflicts, I’m now focussed on bringing some of my favourite “motorsport moments” to life by making and painting miniature figures to represent many of the famous characters from the world of Formula 1.Â  Recently, I was thrilled when the national broadcaster featured my work on the very popular Nationwide TV programme broadcast each evening on RTE1. Contact me by Email: pmarshall25@gmail.com 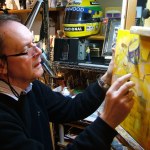 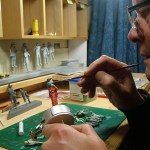 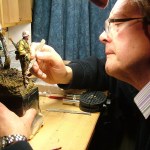 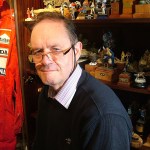