The motor racing legend which is; Tazio Nuvolari is beautifully captured in this latest casting from Immense Miniatures in the USA.    Known by fans as the “Flying Mantuan” or the “Great Little Man”, he was slight in stature and stood just over five feet tall.  This aspect of Tazio’s physique is captured very accurately in the casting (1/18) and it results in the figure appearing (correctly) to be small when posed with other figures of the same scale.  The facial likeness is spot on and the detail is excellent.  After a clean-up and assembly (head and left arm is supplied separately), I undercoated with primer and painted him up using Vallejo acrylics.  Actually, two heads are supplied in the kit, one bare head and the other helmeted, both beautiful likenesses.  I added a couple of additional details, in particular a broach of his famous emblem, a small tortoise which he often wore around his neck and attached to a ribbon or scarf in the Italian colors.  Two cloth badges (one each side of his chest), patch with his initials together with another patch again of the tortoise and national colors.   I also elected to give his face that dirty look from sitting in an open cockpit trying to wrestle a front engined beast and at the same time, keep the pack behind!  Finally, although not common in the early years of racing, I added a Pirelli decal to the back of his overalls.  I enjoyed painting this character figure, however, it is time to move him on to its new owner, see my Ebay sales for more information. 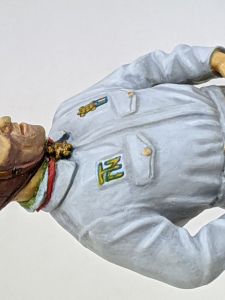 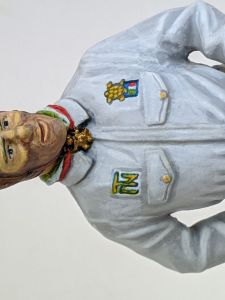 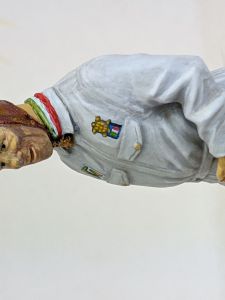 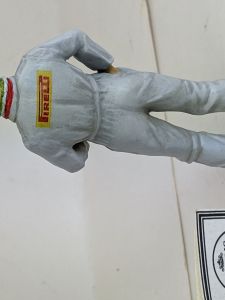 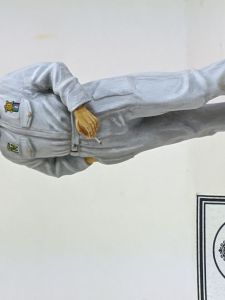 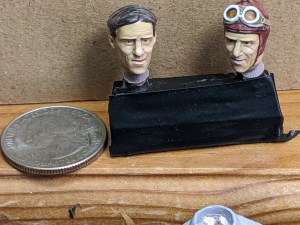