A legendary Swiss driver who had great success in F1 with the likes of; March, BRM and Rob Walkers private racing team.  In sports car racing, he also notched up quite a reputation as a regular top line driver with the factory Gulf Porsche team.  He’s another driver who sadly perished in the cockpit (driving for BRM), following a crash and a most dreadful fire at a non championship race in Brands hatch 1971.   This little figure depicts him in the his Gulf  / Goodyear overalls, and sporting a rain visor rather than the traditional goggles mounted on his helmet as protection from the elements. 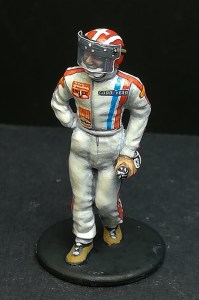