I bought this Casadio Alfa Romeo (P3) 1/20 scale metal kit on Ebay recently.  Some partial assembly has been done by the previous owner and judging by the poor finish, I would say it was done by someone who had little or no experience at model building – hence I got it at a good price. I remember seeing this kit for the first time back in the early eighties (on a trip to London), and ever since then I’ve had a “hankering” for it.  Originally manufactured by an Italian company called Casadio and in a pre- Internet world it was one of those “hard to find” kits.  Back then, I didn’t have the money or the model building skills to justify buying it, so it was added to my never ending “wish list” but over the years it was “overtaken” (oops!) by the easier assembled (and much more attractive) plactic kits from the likes of Tamiya etc.  Call it old age or maturity (or as my wife would probably term it; “Male-Madness”) and with the passage of time, I began to take more of an interest in the Classic and Vintage motors and so rediscovered my “bug” for the Alfa kit which by this time, was being manufactured by another Italian company called; Revival.   Revival make a complete range of similar models covering Maserati, Merecedes, Auto Union etc and for the last number of years they have been easily sourced on the net, however, I resisted the urge to buy many times as I was on an enforced “buying diet” given the amount of unmade kits I had amassed!    In the last couple of weeks I was browsing Ebay (tring to price some more items which I plan to move on) and I happened to spot this kit – well that’s my story and I’m sticking to it!  Apart from the very poor partial assembly work done so far, there are a number of shortcomings in the the kit itself (as part of the manufacturing process) ie, the body comes prepainted but it’s far too heavily applied and appears to have been sprayed directly onto the metal (without a primer!).  So the first job will be to strip the paint together with the decals  and start afresh.  Another area I’d like to improve would be hood/engine cover by adding retaining fasteners or catches, which were very prominent on the real car.  If I can muster the courage, I might even try my my hand at opening up the louvres – we shall see! It’s not all bad news and one highlight of the kit are the fantastic wire wheels  – just superb.  In the next couple of weeks I’ll start setting out a workplan which will hopefully deliver a satisfactory result so in the meantime, enjoy the photos of how it stands at the moment.  One of the photos shows when the previous owner bought it and what he paid for it (it was written on the inside of the box) – making the kit 36 years old and the price I paid is just a couple of pounds higher than it’s 1977  value – so I’m very happy! 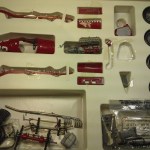 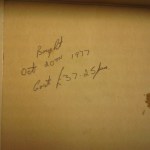 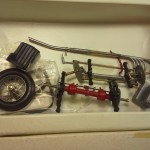 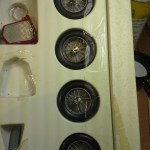 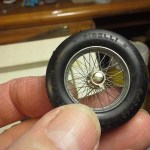 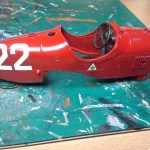 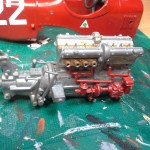 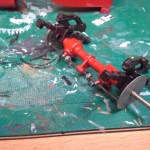 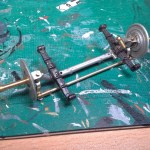 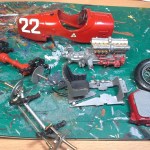 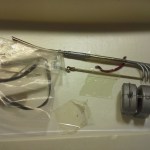 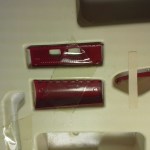 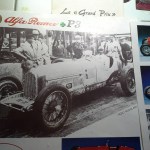 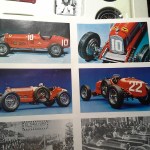 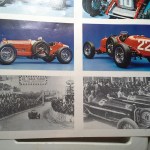 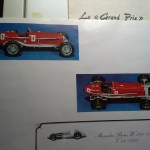 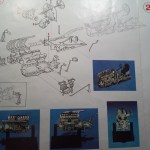 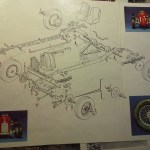